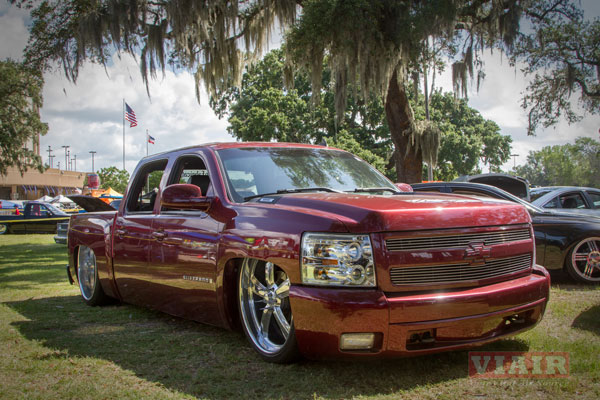 Located along the Gulf Coast of Mississippi, the beautiful city of Biloxi hosts Scrapin The Coast, known as the wildest show on the coast. This one of a kind show is the South’s largest premier car, truck and motorcycle show bringing visitors and custom vehicles from all over the country. VIAIR attended Scrapin The Coast for the first time ever this year! The show is held at the Mississippi Coast Coliseum and Convention center, and features an indoor section for the prized feature vehicles and outdoor show with live music. 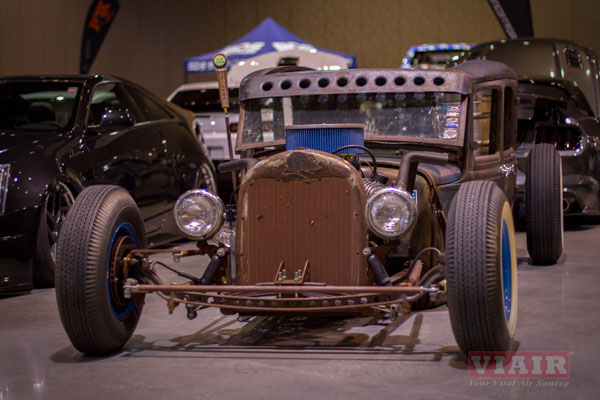 We were excited to showcase our New Gen. 2 Dual Packs to our fans and community on the East Coast. And, we were proud to have Kate Simpson’s award winning VIAIR equipped Toyota mini truck at our booth! 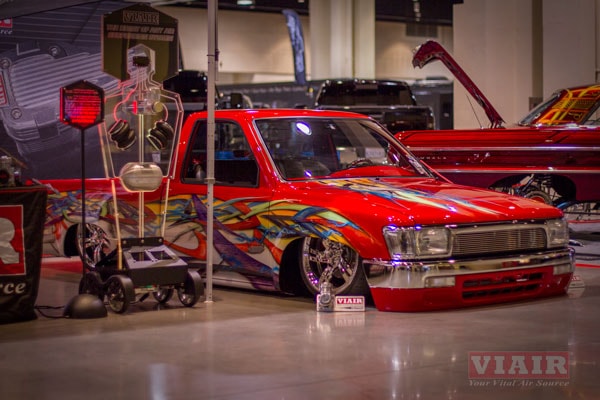 Scrapin The Coast exhibits top quality vehicles in the air suspension industry, so it was the perfect setting for VIAIR to display our New VIAIR 425C Gen. 2 dual pack to show attendees. With our extensive product line, we filled four tables displaying our selection of compressors, fittings and products for air suspension and off road industries. Even though we revealed our New 485C Gen. 2 dual packs at the Forbidden Fantasy Show 2018 Presented by VIAIR earlier this Spring, we wanted the air suspension community on the east coast to have a chance to see these game-changing, 100% @ 200 PSI compressors for themselves! Read more about our 485C Gen. 2 dual pack’s in our previous blog post here. 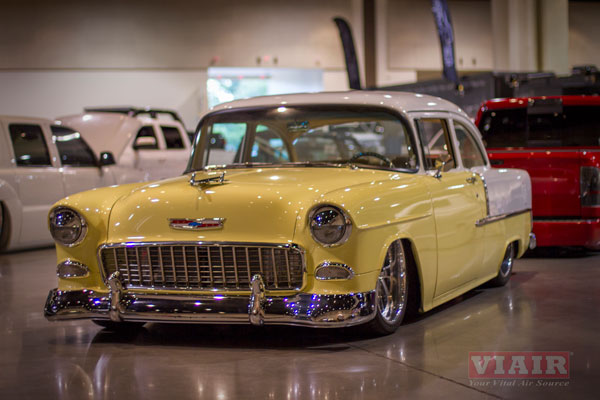 We know that VIAIR is the heart of any air suspension system, which is why we continued to use our light-up display as an educational tool about how air suspension works. The compressor pairs as the heart, air bags as the lungs, the controller as the brain, and airlines are like veins through the body. If your heart fails, the rest of your body cannot function. This is why it’s important to purchase a good quality heart in order to receive a good running system. It’s as simple as that. 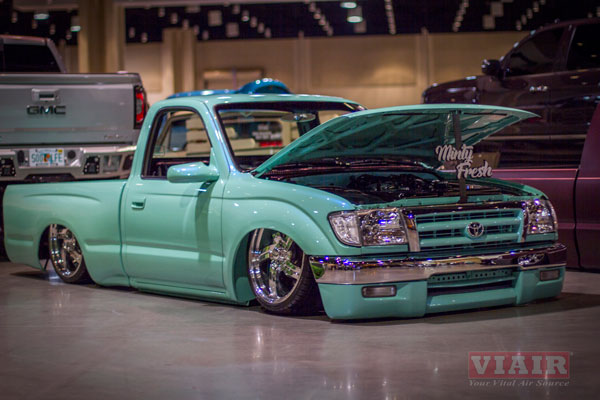 Greg Miller, Eric Kendrick, Ronny Tolar and Myles Holcomb have been the event organizers and hosts for the past 16 years since its original location Gulfport Sportsplex in Gulfport, Mississippi. Beginning with over 450 vehicle entries, the show eventually outgrew the facility in the first year to its current location at the Mississippi Coast Coliseum. Scrapin The Coast brings spectators from all over the US, including Khaos Design, who came all the way from Australia and stopped by VIAIR in California after the show to pick up product and say hello! 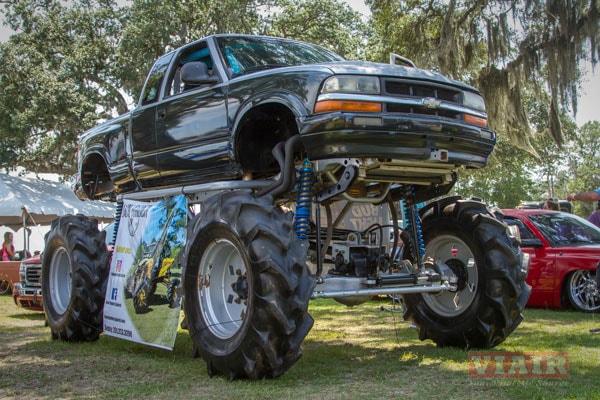 Record vehicle and spectator attendance this year featured true excellence in the custom car community. With an attendance of approximately 18,000 spectators and over 1,800 feature vehicles, this southeastern show did not disappoint! Attendees and vendors alike had the opportunity to enjoy special performances by popular rappers Tone Loc and Young MC at the outdoor stage. 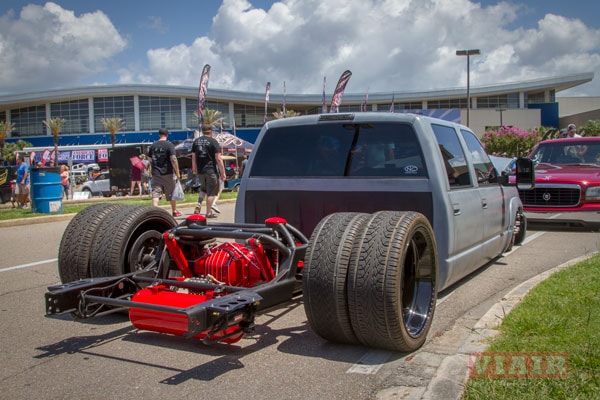 Featured as one of the cover trucks for Scrapin The Coast show flyer, we were honored when she agreed for her Toyota to be our booth vehicle representing VIAIR. This iconic mini truck has an exciting and meaningful background that mirrors the excellence of the build and owner herself.

Kate Simpson and her husband Mike first came across the truck from Craigslist in need of a major overhaul. The manual transmission was the first hurdle of many to come that would require blood, sweat and tears put into this timeless classic. Craig Rowley of Battle in Bama convinced Kate to have her truck’s finished look for the first reveal by May 5th. This added pressure required Kate to learn how to drive a manual by practicing driving to work and back everyday. Her husband Mike handled the bodywork and install of dual Stealth Black 444C VIAIR compressors featuring with Air Lift Performance air management system.

After pulling the motor and transmission, it became clear the build would turn into a full-blown overhaul by removing the bed and cab to be repainted or replaced. What began as Mike’s sole project (with car parts taking over the house!), soon became Kate’s reality.

Mike had built trucks in the past, but this one was solely Kate’s pride and joy. She got fully hands-on with this makeover build – peeling the bed liner, scuffing, and taking apart the interior to be repainted. Mike painted the base color “Mazda True Red” and sprayed the new bed liner to color match and be prepped for graphics by John Wargo of The Custom Shop before Lone Star Throwdown in February. That left only a few months to get the graphics approved, motor re-installed and Mike putting the interior together while Kate installed the wiring. After the interior was complete, Facelift went back to The Custom Shop for John to upgrade the seat and door panels. The final piece of the puzzle was to complete the billet wheels and making sure they were properly fitted in the correct direction, which is still up for debate by a few.

The final reveal at Battle in Bama wasn’t without a few hiccups. Loading the truck into the trailer, the truck would not start which required a push-in and a stressful 12-hour drive to Alabama. When they arrived, to their surprise, the mini fired right up and was able drive into the show.

Since the Battle in Bama show, Kate has felt her life has been changed forever by unforgettable memories with amazing friends and her appreciation for her husband and their teamwork. Kate thanks her husband Mike Simpson: without his help, guidance, and patience, she wouldn’t be where she is today. She would like to give a shout out to John Wargo at The Custom Shop for amazing graphics and interior, and to all the other fellow mini truckers that helped with parts, heavy lifting, or being a source of knowledge for all the questions.

Kate mentions, “This scene isn’t about what build you have, it is about the people behind the build because that’s what gives each build its own personality and character. Minitruckin isn’t dead!” 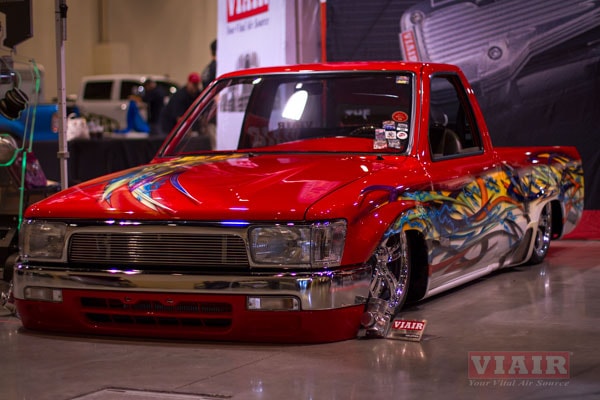 All custom awards were created by the talented Joe Vincent of Vincent Dezigns, Brandon McCoy of Gooch Customs, Doug Johnson of Aftermath Designs and Josh Welch at Welch’s Chop Shop. 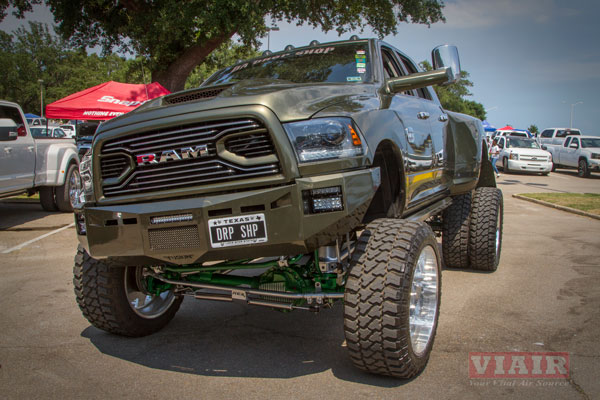 Take a look at what Joe Vincent of Vincent Dezigns, has to say about his experience with VIAIR!

Many of the car clubs and vendors at Scrapin The Coast were equally impressed with all of the award-winning vehicles at the show. 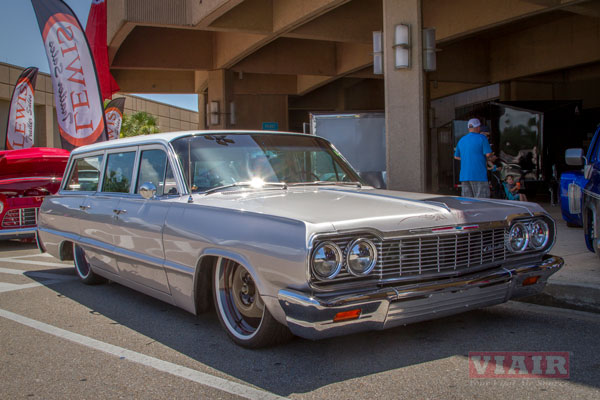 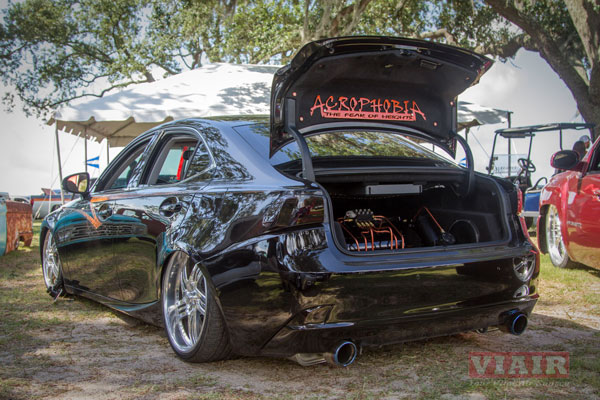 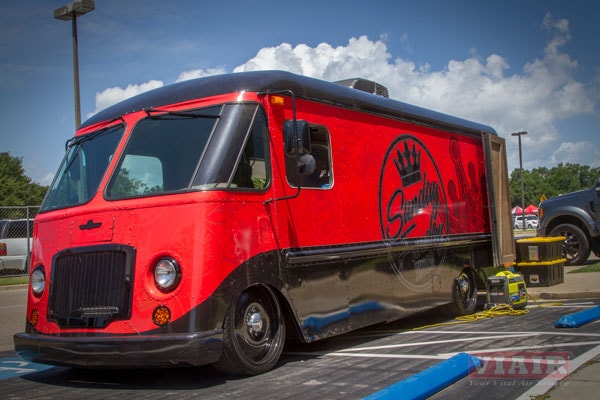 We loved our first experience at Scrapin The Coast, and would like to give a special thanks to Greg Miller and the Scrapin The Coast team for putting on another excellent show. Until next time! 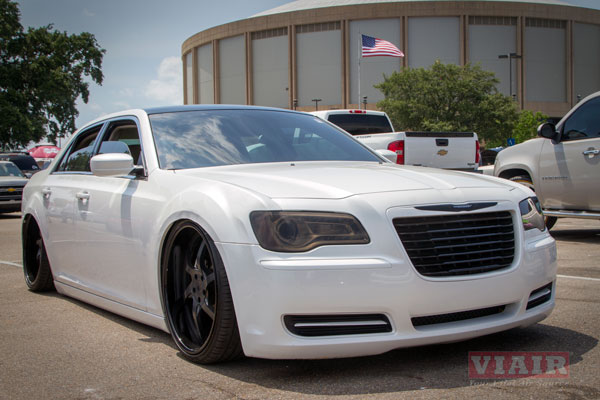 And remember, if you have any further questions, you can always contact us: